5 Ways Your Child Will Benefit From Martial Arts

These days, martial art programs for kids are more important than ever. While organized sports are beneficial too, not every child will have the interest or talent to succeed and thrive in them.

Martial arts give them an alternative that can take them a long way in life. Here are 5 reasons why.
1. Lots of Activity.
Now more than ever, iPads, and game boxes have taken over their free time. If they’re not in organized sports, kids might not be getting any activity at all. Our county has one of the highest rates of obesity in Illinois, but we don’t have to accept this for our kids. Martial arts classes have them doing lots of kicking and punching, calisthenics, sparring and grappling, and more. That’s a lot of activity
2. Courtesy and Respect.
Good manners are hard to find sometimes, but not at a Karate school. We teach and expect the kids to say “yes Ma’am” and “yes Sir.” They bow, shake hands, and have to use self control. We want them to do this everywhere. Even if you teach these things at home, it’s nice to have someone else reinforce them.
3. Setting and Achieving Goals.
Our attention spans are shorter than ever these days. It’s easy to quit things too. But if a kid can learn to stick it out, they’ll also learn that continued effort plus time equals success. Martial art belt ranking systems teach kids how to work step by step to achieve their black belts and become leaders. These are kids who’ll know how to work toward a goal, in school, college, and a career.
4. Confidence and Self Esteem.
As the kids move up through each colored belt, they show their competency with the new material. This leads to promotion and a new belt color. There is also a lot of ceremony attached to their success on promotion and nights. Knowing and showing what they can do builds their confidence, and each success strengthens their self esteem.
5. Learn They Can Take It.
In everyone’s life, there comes a point when you have to just lean in and fight for something. Nobody ever wants to be knocked down, but life is full of hard knocks. In any martial arts class, everyone takes a hit from time to time. The goal is to strike with control, but even with padding, and protective gear, it can be a shock. When kids learn that they can take it, and stand in there and keep swinging, that can take them a long way in life.
There are two programs for children in Paris. Black Lotus Ju Jitsu is offered at the Paris REC Center, and taught by Sensei Randy Turner, 3rd Degree Black Belt. Karate for Kids is offered at Tom’s Fitness, featuring Taekwondo and Brazilian Jiu Jitsu, taught by Ms. Heather Warren and myself. Give them a try!
(Tom Dolan has an M.A. in Education, specializing in Exercise Physiology and Sport Biomechanics. He is also a 6th Degree Black Belt and Master Instructor with over 30 years experience, and the owner of Tom’s Fitness and Martial Arts in Paris, IL.) 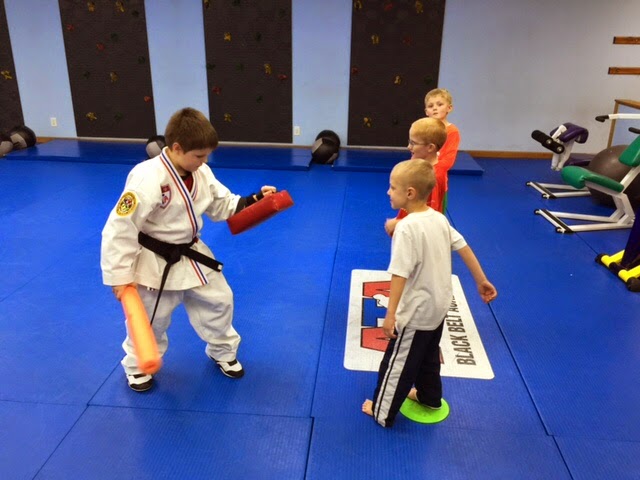